Recommended books for children and teens

A House Without Walls by Elizabeth Laird

Syrian ‘tween’ Safiya with the nice phone, slightly sticking out teeth and grumpy aunt has to flee when ‘they’ are on the trail of her lawyer father.

When the Jordan village relatives’ hospitality wears thin the family have to make a life in a tent in the grounds of the reluctant cousin… trying to earn pennies and keep clean without a bathroom, and weatherproof in the storms and snow without any elecectricity. Education gets forgotten as Safiya finds ways to make ends meet and cook an edible meal… Contrast Safiya’s semi-secret twin sister who has grown up with every luxury in a nearby city.

This is more nuanced than just victim/hardship contrasts, Safiya obviously develops all sorts of character strengths and skills through her experience. With her affluent start she is as easy character for Western children to identify with while gently appreciating some cultural differences, especilay about teens honouring their father.. even if he has sunk into depression. There is also the sense that anything is better than being sucked into limbo-living in a Refugee camp.. even irritable unreasonable relatives. Suitable for 9+, threat is implied rather than explicit and there are no nightmare-inducing descriptions.

Classic autobiography from Judith Kerr (creator of Mog). Being Jewish (her father was actively resisting the regime) she fled an increasingly Nazi Germany at the last minute leaving the beloved family nanny and a comfortable affluent lifestyle. There’s a great description of the train journey, she and her brother slightly too young to fully understand the full danger of the passport checks, but noticing clues to their mother’s tension.
The family settles temporarily in France and Judith Kerr (9 year old Anna in the story) has to attend school without understanding a word of the language, great reading for EAL and class teachers of New Arrivals. Anna’s artwork is very important to her (Kerr goes on to become an author and illustrator) and it’s touching that among their few possessions her mother has included Anna’s paintings.

Great for older KS2 children studying WW2 but don’t let them near the sequels, they’ve very much more adult in content.

Boy at the back of the class Onjali Q. Raúf

Sweet and lively story about a child with a tolerant friendly mother helping peers to overcome their prejudice and build a cross-cultural friendship with the new refugee lad in the class. We long for Ahmet (“an unaccompanied minor” from Syria) to reuinite with his parents and this is a poignant spur to action for his new friends. Written with just the right level of sadness for a modern British 8 year old to relate to without being traumatised, this could be a great introduction to the subject.

(As an EAL teacher I notice with a pang that Ahmet happens to come with funding for a full time bi lingual EAL support teacher.. if only!) It’s increasingly popular as a class book, here’s a link to a good plan I noticed on the TES website. https://www.tes.com/teaching-resource/boy-at-the-back-of-the-class-knowledge-organiser-12358419 Here’s the author reading a snippet https://www.youtube.com/watch?v=31RqI4Kwm-s&ab_channel=BookTrust (followed by her TED talk).

The Breadwinner by Deborah Ellis

Another well-researched moving fiction book about the effects of conflict, but in contrast this one is not suitable for Primary School children despite its marketing.

It’s well-written and thoughtful but no matter how young and innocent your heroine you can’t have books for children depicting scenes of mutilated corpses on the streets of Afghanistan being mauled by dogs. I was shocked and educated by the lengths to which the Parvana is driven to earn money for her family… including digging up bones from graves to sell. Parvana is young enough to pass as a boy so her semi-respectable options are street vendor, reader for the illiterate or tea boy. Meanwhile the effects of hardly stirring outside the room are well described for her older and younger sisters. As an adult I found this informative and am keen to read the two sequels.

I totally love Benjamin Zephaniah’s playful poetry but don’t read this expecting the same sparkle and humour. It’s a serious (even slightly understated) book aimed at Young Adults and was about right for my bookish son aged 13… but he found it slightly hard work.

Studious young Alem whose heritage is mixed Ethipoian and Eritrean is left by his dad at a hotel in the UK for his own safety and fostered by a white British family with a stroppy teenage daughter.

He handles himself magnanimously through the tribuations of settling into school and navigating the British Asylum System until the dramatic and tragic climax. It was written a decade ago but gives a good solid ‘way in’.

The Ungrateful Refugee by Dina Nayeri

The most vivid idea I took way from this was how very beautiful and cultured Iran is and the utter incomprehensibility that someone might voluntarily leave their lovely home in Isfahan with its yellow spray roses, orchards and swimming pool in the garden, not to mention the lavish affection of grandparents, successful education and respected jobs for “a better life” in the West.

There are poignant vignettes:

·     their Mum determinedly erasing the pencil answers with great thoroughness from used textbooks donated by a local school on their journey who wouldn’t admit the children.

·     her younger brother’s enforced name-change from Khosrou to Daniel

·     the cultural difficulty inherent in presenting a true, relevant, effective and believable account of your story to a Dutch Asylum Immigration Official with utterly alien assumptions about truth and story-telling and complete ignorance of the relevant regime

·     the Afghan couple from a large squat house painted blood orange and mint green in a mountain village whose car was interfered with by the Taliban so that when they drove the local hazardous mountain pass, 2 of their sons were killed and the rest of the family sustained horrific injuries

“No one asked what we did in summers or if we had any photos of the Caspian Sea… Somehow it didn’t feel OK to tell them about my funny dad with his pockets full of sour cherries, or my grandpa who removed his false teeth when he told ghost stories. Such memories, of course, would imply the unthinkable: that Iran was as beautiful, as fun, as energising and romantic, as Oklahoma or Montana or New York.”  Dina Nayeri

The Beekeeper of Aleppo by Christy Lefteri

In common with ‘The Ungrateful Refugee’ there is a glimpse of how beautiful home was (in this case Syria) before it was ravaged by conflict. The focus is on Beekeeper Nuri and his wife Afra’s perilous journey and its immsense emotional toll on them both. The reader too may be shocked by some of the awful things they witness and suffer en route from Aleppo to Istanbul to Greece and finally, England… where something is conveyed of the Mental Health struggles and confusion of many going through the process of claiming Asylum here.

Beautifully written and often understated it hops between the present and the past and draws on the author’s experiences volunteering in Athens.

This should be compulsory reading for anyone in government trying to reform the Immigration system and deal with the issue of exploitative people smugglers forcing desperate travellers into unseaworthy boats. 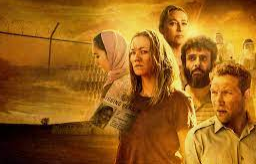 Although this powerful 6 part series is set in Australia there is much that resonates with the experiences of those fleeing who end up in the UK.

Ameer is the Afghan refugee who travels with his wife and 2 children, and whose experiences seem sympathetically portrayed although it is disappointing we know nothing of his context or ‘life before’ fleeing and much of the series’ attention focuses on the white Australian characters.

I particularly appreciated Ameer’s friend trying to explain the confusing convention of “surnames” in the Detention Camp administration and advising him in the end to just make one up to satisfy the interviewer… and how easy it is for someone’s complex travel experiences to allow them to be miscast as a ‘baddie’ according to the immigration process. It conveyed something the brutality and horror of being totally dependent on amoral people-smugglers.